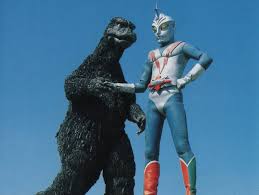 Because GodzillaMomma is about all things Godzilla and Kaiju, but especially Godzilla it is time to talk about an obscure little television series called Zone Fighter.
More directly translated Meteor Human Zone, Zone Fighter was Toho’s answer to Ultraman. When I first discovered this show existed the first thing that popped into my head was, “How could i have not known about this?” My grandmother was our family’s first Godzilla fan and I didn’t know about this until just recently! It’s exciting that there are still such amazing things to learn about Godzilla.

I can easily imagine how delightful this show would be to children. Here’s a quick overview of Zone Fighter based upon some research I happily embarked upon after learning about it.

The Zone family looks like a normal human family but they are actually aliens. The family was forced to flee the destruction of their own world, Peaceworld. A hostile alien race called Garoga Forces destroyed Peaceworld and later set their sights on conquering the Earth.

Fortunately for the Earth, the Zone children are able to transform into super heroes and manage to thwart the Garoga Forces on multiple occasions. The three children are older brother Hikaru, sister Hotaru and younger brother Akira. They are Zone Fighter, Zone Angel and Zone Junior, respectively. They are joined by their mother, Tsukiko Sakimori, and father Yoichiro Sakimori on Earth along with their grandfather who is Zone Great.

Yoichiro Sakimori is an inventor and the proprietor of The Toy Research Institute. In this way he is able to invent the gadgets and things his children use to fight the Garogas Forces without drawing suspicion to his family from Earth people.

Together they battle the Garoga invasion attempts of Earth. The Garoga have an army, and terror beasts that they send to attack. A test driver for cars in his human disguise, Zone Fighter is the main hero and is able to grow to a size to be effective against the monsters using his Zone Double Fight power.

Unfortunately there has been no release of a region 1 DVD of Zone Fighter for fans to buy. There are also no dubbed versions available even if you could get your hands on a dvd, but the stories are easily enough followed that they are enjoyable regardless.